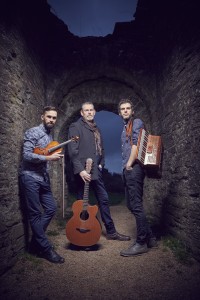 Newport Folk Club played welcoming hosts to a jam-packed, memorable and celebratory  night, just bubbling and brimming over with feel-good, joyous and utterly ingenious music from Wales and further beyond. The evening proudly advertised Tredegar House Folk Festival, which will mark its 30th anniversary on the weekend of May 10-12, 2019; the mighty Alaw, strong possibilities on the festival’s guest list for next year, were the top band to see and hear; but youngsters of every age, shape and size (Mansant, also known as The Lloyd Family Band, and the impressive trio Morfa) showed heart-warming examples of why exciting Welsh traditional arts are simply rocketing up in popularity. It’s all thanks to the wonderful coaching work by a plethora of dedicated teachers, the folk development organisations trac and Clera and, most importantly, committed go-ahead young bands who can inspire and fire young minds. The raffle provided part of the much-needed funds, so the festival can carry on and provide thrilling music and dance for everyone; here’s to this year, and the next year to come.

Mansant and Morfa were the perfect appetisers, filling in time while the audience were waiting for seasoned and spectacular musicians Dylan Fowler, Oli Wilson-Dickson and Jamie Smith, masters on guitar, violin and piano accordion. The Lloyd Family – parents Geraint and Sara, and their children (fiddler and harper Mared, viola player and guitarist Carwyn and the youngest, little Tanwen, who was dwarfed by her double-bass) – showed striking originality in their sparkling arrangements. Sara even put down her accordion to take up and play her Welsh bagpipe, which thoroughly delighted the audience. Morfa were missing fiddler and clog dancer Osian Gruffydd, who was away at university; but fiddler Meg Cox and guitarist Rhys Morris hurriedly recruited Rhys’s harp-playing sister, Elisa, and threw her in with only half-an-hour’s rehearsal to spare. However, Elisa fitted tightly into the band and sang ‘Ar Ben Waun Tredegar’ excellently – and she joined Rhys for a wonderful high-energy clog dance duo, while Meg struck fireworks from her instrument. Mark my words: Morfa are a band to watch.

Alaw kicked off in sizzling style with a set of three spectacular tunes: the Welsh air ‘Y G’lomen’, ‘The Niffy Maggot’ (first performed in the Leicestershire village of Countesthorpe, known by the locals as ‘Niffy’) and the red-hot reel ‘Johnny’s Welcome Home’. Dylan, Oli and Jamie had the audience in the palms of their hands as they launched into the beautiful dance-tune ‘Lord Of Caernarfon’s Jig’, followed by ‘Owen’s Jig’ – both jigs by name, but very different time signatures – while Oli voiced memories of the times he performed with the hypnotic teller Daniel Morden, ‘Seven Stories’. All three harmonised on the fiery ‘Y Ddau Farch’ (The Two Horses), while Alaw polished off the old plygain carol ‘Gwêl Yr Adeiliad’ (See The Building) in grand style.

The audience were with them all the way as Oli introduced the stark and lovely ‘Pan O’wn Y Gwanwyn’ (Spring Song), from Maria Jane Williams’ collection National Airs of Gwent and Morgannwg, which won her first prize at the Abergavenny Eisteddfod in 1837 and was published in 1844. ‘When It’s Gone’ was another Oli composition, the words and the melody seemed to drift and linger, trying to catch warm memories like chasing the summer sun, a lovers’ embrace or a last trace of sweet-tasting wine. Alaw brought their set to a thrilling climax as they sprang into ‘Ty Coch Caerdydd’ – such a familiar tune, but what a brilliant arrangement – and then roared into the J. Glyn Davies sea shanty ‘Santianna’, with all three musicians coaxing accordion, fiddle and guitar to new kick-ass heights, before finishing up with their successful album title tune ‘Dawns Y Gŵr Marw’ (Dead Man’s Dance). The crowd erupted, bellowing for more; and Dylan, Oli and Jamie obliged with the dizzy, tumbling ‘Roaring Hornpipe’ before striding out into the well-loved jig ‘Mopsi Don’. With such jaw-dropping and utterly breathtaking master players hopefully coming, it looks as if next year’s Tredegar House Festival will top the lot.