Welsh Folk scored a fantastic triumph as Calan, The Trials Of Cato, Martyn Joseph, Alaw, VRï, Gwilym Bowen Rhys and other exciting and inspiring artists were crowned trophy winners of the inaugural Wales Folk Awards 2019 – but the highest accolade went to Roy Saer, who was presented with the Lifetime Achievement Award for his many decades of work and scholarship with the traditional songs of Wales. 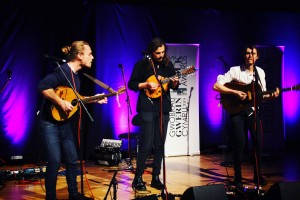 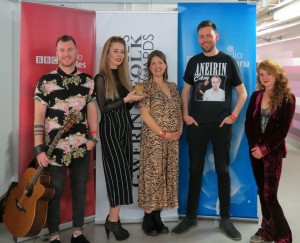 The packed audience in the prestigious Hoddinott Hall at the Wales Millennium Centre rose to their feet to honour Roy, who began collecting and recording Welsh folk songs in the 1960s. His massive collection is at the heart of the St Fagans National Museum of History folk song archive, housed in St Fagans in the Western outskirts of Cardiff.

Four award-winning acts – The Trials Of Cato, VRï, Gwilym Bowen Rhys and last but not least, Calan – spiced the evening with their breath-taking, beautiful music. Calan, with lead singer Beth Rhiannon using her brilliant voice with electrifying magnetism, brought the Cardiff Bay night to a glorious end with the patriotic song ‘Kân’, concerning the future of the Welsh language and culture with Angharad Jenkins declaiming the words of her father, the late poet Nigel Jenkins, from an extract of his work ‘The Creation.’ The eerie chorus is based on the style of traditional psalm chanting popular in the west Wales chapels at one time.

BBC folk show presenters Frank Hennessy and Lisa Gwilym hosted the celebration, and guests from the world of music and the arts – including DJ Janice Long – joined the evening to present some of the awards. Martyn Joseph won Best Original English Language Song for his upbeat and uplifting ‘Here Come The Young’, about an army of first-time voters who are appalled with the selfish Westminster ‘Little Britain’ mindsets and vow to end Brexit-led racism, money-grabbing and open hostility to our European and World neighbours; Lleuwen, who lives in Brittany and plays concerts in Wales and the United States, won Best Original Welsh Language Song for her ‘Bendigeidfran’, which she wrote while shocked at the referendum Brexit disaster. In the song, she appeals to the legendary Welsh giant to lay down and form a bridge of understanding and harmony between the United Kingdom and Europe. Pendevig, composed of 15 musicians, dancers and rap, won the Best Live Act; meanwhile, VRï won two awards – best traditional Welsh Song (‘Ffoles Llantrisant’) and Best Album (Tŷ Ein Tadau).

The winners and the shortlisted nominees are shown here:

These Are The Things – The Trials of Cato

The Folk Prize for the best collection of three original tunes went to Huw Roberts of Ynys Môn / Anglesey, well known for his playing of the iconic Welsh instruments the triple harp and the crwth as well as the fiddle.

Two Carmarthen craftsmen– blacksmith Aaron Petersen and woodturner Rob Hopkins – made the trophies, which are based on 18th Century rushlight holders. Each one is unique and uses locally sourced wood. The trophies have quite a pedigree, as Aaron is a craftsman from a folk dynasty – his father is piper and blacksmith David Petersen, who led the Welsh Delegation at Lorient Interceltic Festival for many years, and his son Sam plays pipes and whistle in the Youth Folk Ensemble of Wales.

The Wales Folk Awards have been created by a partnership of trac, BBC Radio Wales and Radio Cymru, the Arts Council of Wales and other important figures from the world of Welsh folk, such as Huw Williams and Stephen Rees. The winners of the Folk Awards were chosen from a long list created by a Nominating Panel representing folk club and festival organisers, young musicians, tradition bearers, music journalists and broadcasters, promoters, folk activists and enthusiasts.

Let me tell you about the Welsh Not – a piece of wood, or sometimes lead, inscribed with the letters WN and found in many Welsh schools during the 18th, 19th and early 20th centuries. Essentially the Not was given to the first child to be heard speaking Welsh and was then passed on to the next until, at the end of the day, the unfortunate child in possession was subjected to punishment of some kind, often a beating or flogging. The idea behind this was to discourage the use of Welsh and to promote the establishment view that English was the language of moral progress and opportunity.

What has this got to do with Welsh Folk? Well, there is a theory that if you suppress the language, you suppress the culture and it can be argued that, in the past, Welsh Folk and Traditional music has not had the level of exposure enjoyed by its Celtic cousins. That, however, seems to be changing with Wales hosting Womex in 2013 and, more recently, Wales being the featured nation at both the 2018 Festival Interceltique In the Breton city of Lorient and the English Folk Expo in Manchester. something else that will no doubt help the process of change is the creation of Gwobrau Gwerin Cymru – The Wales Folk Awards.

As an idea, the Awards have been around for about 15 years but they have only been made possible now through the hard work and dedication of trac Cymru, Arts Council Wales, The British Council, BBC Radio Wales and BBC Radio Cymru, the culmination of which was the gala evening at The Wales Millennium Centre in Cardiff Bay, with the ceremony itself being held in The Hoddinott Hall, normally home to the National Orchestra of Wales.

The format of the awards would be familiar to anyone who is familiar with these types of event, with the nominees for nine categories: Best Instrumental, Best Emerging Artist/Act, Best English language song, Best Traditional Welsh language Song, Best Original Welsh Language Song, Best Album, Best Group, Best Solo Artist and Best Live Act being announced in batches in the weeks leading up to the ceremony. The remaining two categories being the Folk Prize and Lifetime Contribution award. Out of these last two, it was the Folk Prize that intrigued me the most, being open to anybody to submit three original tunes and the award being given the best set as judged by the panel of experts. The inaugural Folk Prize was awarded to Huw Roberts from Anglesey, a stalwart of the North Wales Folk Scene and noted player of iconic Welsh instruments the Triple Harp and Crwth, as well as the Fiddle.

The awards evening itself followed a familiar format with the presentations interspersed with live performances from The Trials Of Cato, Gwilym Bowen Rhys, Vrï And Calan, a couple of guest presenters with Folk Alliance International president Lisa Schwartz and legendary DJ Janice Long handing over the Best Original English Language and Best Emerging Act or Artist awards respectively, the whole evening brought together by Two excellent hosts in the form of Cardiff folk legend and broadcaster Frank Hennessy and Radio Cymru presenter Lisa Gwilym who kept this necessarily bi-lingual evening moving without giving the feeling that things were being rushed.

Whilst excellence was being rewarded, this was also an awards ceremony with one eye very much on the future. Martyn Joseph was a well-deserved winner of the best original English Language song category for his song of faith and hope, Here Come The Young And, likewise, D. Roy Saer was a worthy recipient of the Lifetime Contribution award for his work collecting and preserving the traditional songs of Wales. I was impressed that this was given for what the recipient has contributed rather than what they have achieved, something that I think is unique in this type of award.

It was, however, predominantly the younger performers who walked away with the prizes on the evening. The Best Instrumental Award went to Alaw, the trio made up of Mabon bandmates Jamie Smith and Oli Wilson-Dickson along with Stiwdio Felin Fach producer and guitarist Dylan Fowler, for ‘Dawns Soïg’/’Dawns Gŵr Marw’; and Gwilym Bowen Rhys, the young singer from Bethel, the village in Snowdon’s foothills, picked up the award for best solo artist. Gwilym is a rock star turned folk star who first came to prominence with Welsh rock band Y Bandana before forming alt-folk trio Plu with his sisters Elan and Marged and then embarking on a solo career.

Two awards went to the trio VRï, consisting of Patrick Rimes, a member of Calan, the Cerys Matthews Band and a regular collaborator with Sir Bryn Terfel, Jordan Price-Williams of Elfen and NoGood Boyo, and Aneurin Jones (NoGood Boyo). This Welsh chamber folk threesome picked up Best Traditional Welsh Song for ‘Ffoles Llantrisant’ And Best Album for their debut release Tŷ Ein Tadau. The Best Original Welsh Language Song award went to a singer whose work encompasses jazz and folk, has lived in Wales and Brittany and sings in both Welsh and Breton. Lleuwen has music In her blood, being the daughter of singer & composer Steve Eaves; she won this category for ‘Bendigiedfran’, a song based on the Mabinogi tale of Bran The Blessed, the giant who used his frame as a bridge to facilitate the rescue of his sister Branwen from her abusers. The Emerging Artist Or Act category went to The Trials Of Cato, the Anglo-Welsh trio who first got together whilst teaching in The Lebanon and who, since returning to these shores, have gigged and toured tirelessly to establish a reputation as one of the best live acts on the circuit today.

The Best Live Act award went to Pendevig,the 15-piece supergroup made up of musicians across a range of genres, including members of Jamie Smith’s Mabon and Calan; finally, the Best Group award was presented to Calan, the band who have been taking Welsh traditional music to the world and pushing its boundaries ever since they first started performing together in 2006.

One thing that came out of Roy Saer’s lifetime contribution award was that the songs he collected “came out of the fields with mud on their boots,” and that those songs were preserved to be used by future generations and not to be kept in a vacuum harking back to a mythical golden age. All these winners have added to the canon of Welsh folk music, not just through contemporary material that addresses modern issues but also by taking the old songs and remaking them for our times by adding influences that are significant to them.

This inaugural awards night was a joyful celebration of Welsh folk and traditional music, and it was good to see contributions in both of the nation’s official languages being rewarded – but now the hard work begins, not just to tell the word about what Wales has to offer but also to mark potential future award winners (so that we don’t end up in a situation where the same faces are up for the same awards, year in, year out) and nurture that talent.

In recent weeks, I have heard of a friend’s son who was told by his college tutor that he wasted his time attending a Welsh medium school. On the evening of the ceremony itself, a member of a well-known Welsh band told me that, when pitching for festival spots, they had been told: “But we already have a Welsh band on the bill.” I wonder how many festival organisers would say the same about Scots or Irish music, let alone English? Each has a plethora of styles making them unique, whatever the language. There are still hurdles to overcome, attitudes to change, and Welsh folk and traditional music has some way to go in order to reach the same levels of exposure as music from other Celtic nations – but the creation of these awards is a massive step on that journey. Long may they continue.

Photos of Calan and The Trials Of Cato: Elisa Morris, Alun Gaffey