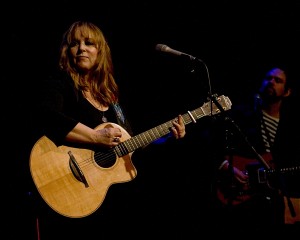 Gretchen Peters is glad to be touring Wales and other parts of the UK, far away from the gloomy administration-led unpredictability, uneasy violence and irrational madness that has damaged her country’s reputation and honour so much. As she and her three-man band finally closed the show, the delighted audience rose out of their seats to a man and woman, cheered, soundly clapped and shouted for more – and Gretchen, born in Bronxville in New York State and now living in Nashville for the past 30 years, happily obliged.

Originally, the Roots Unearthed series booked Gretchen into the L3 Lounge – however, tickets sold so fast that she was moved into the 2,000-seater St David’s Hall. She totally topped her new prestigious space; her performance, accompanied by arranger, husband and Nashville resident Barry Walsh and two masterful musicians from Ireland, bassist Conor McCreanor and spectacular Belfast guitarist Colm McClean, was absolutely stunning

Gretchen uses her magnetic stage presence and her soulful voice to enhance her intelligent and super-melodic writing, which has won her fulsome praises from many a worldwide music pundit. She showcased her new album, Dancing With The Beast, which was released this year; in this album, her songs zoom in on feminine values and characters, from teenage girls who are juggling with awakened sexuality and objectification to older women of a certain age, coping with uncaring modernity and inevitable loneliness. Her opening lyrics, embellished by Colm’s spacey guitar artwork, were: “I get lost in my home town / Since they tore the drive-in down…” ‘Arguing With Ghosts’, which she co-wrote with Nashville singer-writer Matraca Berg and Ben Glover, began as a germ of an idea about how the city is inexorably changing, and the song developed into a feeling of bewilderment and disorientation: “The years go by like days / Sometimes the days go by like years / And I don’t know which one I hate the most…”

The wistful beauty of ‘The Boy From Rye’ casts her way back into her teens and her ever-growing adolescence, while she revisits the powerful ‘Blackbirds’. ‘Truck Stop Angel’  conjures vivid images of parking lot prostitutes, some as young as 17. Introducing ‘Lowlands’, she reported: “There’s a lot of news coming out of America, and none of it is good.” She said that she went to sleep on election night in November, 2016, and woke up the next morning in a completely alien country. People were scared, suspicious and accusing: “Who did you vote for?” ‘Lowlands’ was edgy, brooding, shocking and magnificent.

Singer-songwriter Kim Richey, another Nashville neighbour, joined her in fabulous harmony in ‘Say Grace’; Kim had opened the show for Gretchen, and her clear voice rang like out like a bell. She impressed many punters, judging from the lengthy queue who bought her new album; Barry, which his accordion and grand piano, added his vocals to make a thrilling and exquisite three-part harmony.

Gretchen displayed the whole gamut of her repertoire, including the title song, the growling swagger of ‘Disappearing Act’ and the desperate sadness of a break-up in ‘On A Bus To St Cloud’. She stands on a pedestal with Richard Thompson as being the most compelling songwriter on the scene today; like Thompson, her lyrics are astounding, cramming original ideas, words and memorable tunes into a few sharp minutes. The only niggling issue was her dramatic drop of voice, the whispered phrases tending to get lost for the audience.

For the final encore, Gretchen stepped down from the stage to the auditorium and sang, completely solo and unamplified, ‘Love That Makes A Cup Of Tea’ – her affectionate tribute to her mother, who passed away in 2016. It’s so good to welcome her back.