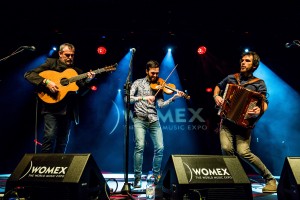 The trio has been playing together since 2013, but their solid reputation has really taken off with the success of their latest album Dead Man’s Dance, which received a nomination for best traditional track in this year’s BBC Radio 2 Folk Awards and was allotted a five-star review in FolkWales Online Magazine. “It will be amazing to play at The Royal Albert Hall and to work with the BBC Concert Orchestra”, said fiddle player Oliver Wilson-Dickson. “We love all our gigs, however big or small. It feels like a great time to be playing Welsh traditional music with some excellent bands now gaining international recognition – people are realising what an exciting musical tradition we have to share.”

The musicians in Alaw (pictured here, photo by Eric Van Nieuwland) have been playing on the folk scene in various guises for many ears. Dylan Fowler’s touring credits include Richard Thompson and Danny Thompson. Oliver and Dylan have a long history of working together, sharing projects such as The Devil’s Violin, Szapora and The Ian McMillan Orchestra. Oliver and Jamie Smith are well known as the front-line of the multi-award-winning Jamie Smith’s Mabon. “It’s a joy to work with such amazing musicians”, Oliver said. “They both bring so much passion and personality to the music.”

Their album has received broad critical acclaim and was featured album of the month on FRUK. It has been played on radio stations from Australia to Hawaii. The 2018 tour schedule is:

Oliver also regularly collaborates with storyteller Daniel Morden, with whom he appeared for four consecutive years at the National Theatre. As a session musician, Oliver has contributed to recordings from Cartoons for the BBC and a BAFTA award-winning film soundtrack to CDs for Warner International. As a composer, he has written for stage productions and BBC Radio 4 drama. He also plays in the house band on the Welsh TV show Noson Lawen. His website is www.fiddle.org.uk

Dylan’s musical palette draws on his experiences in contemporary European jazz, traditional music from the Celtic diaspora, particularly his Welsh heritage and his extensive experience as a collaborator with musicians from countries including India, Bulgaria, Serbia, Bosnia, Finland, Norway, Canada, Germany and Italy. As well playing in many groups, he has developed a reputation as an international solo guitarist, releasing albums on the German label, Acoustic Music Records. ‘This is music with heart, soul and, above all a bullish determination to ignore recognised boundaries.’ Chris Jones – BBC online reviews. Website: www.taithrecords.co.uk

Jamie is one of the UK’s finest accordionists and writers of new acoustic music. He is a folk musician who specialises in the music of the Celts, unearthing and presenting tunes and songs rarely heard, from places such as the Isle of Man and Galicia in north-western Spain. With Jamie Smith’s Mabon, he has performed all over the world, including grand outdoor spectaculars in France, folk festivals in the UK,  forest parks in Italy, waterfront shows in Australia and castles in Poland. Mabon’s six albums all feature Jamie’s original compositions, many of which are published in a book of his music called Tunesmith. Jamie’s website: www.jamiesmithsmabon.com