Jim and his box squeeze out a canny proud tradition 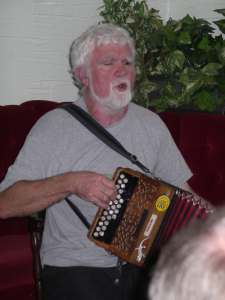 Jim Bainbridge: Bob Davenport says that he “has listened and learned from the People rather than the Folk.”

Jim has been travelling all through his long life, far and wide; from the Marsden Folk Club in the Tyneside town of South Shields, where he was a member of The Marsden Rattlers ceilidh band, to Kent, West Cork in Ireland (where he regularly played in the bars and pubs, as well running a goat farm with his wife, Francie), to the volcanic island of El Hierro in the Canaries, Glen Trool in the Galloway Forest and then to Northern Ireland, where he now lives. He picked up the melodeon in 1964, for a fiver in a Twickenham junk shop, and he has played the D/G box ever since. He learned a tremendous amount from the great London Irish players and from the Marsden Folk Club, which invited such important guests as The McPeake family, Willie Scott the Border shepherd, Margaret Barry and Matt McGinn. He has soaked old folk and contemporary songs and tunes like the proverbial sponge – and the audience really warmed to his patter and his unbelievably wide repertoire, kicking off with ‘The Sheffield Hornpipe’, bass singer Owen Brannigan’s ‘The Neibors Doon Belaa’, and the artful Republicans-versus-Proddies tale of ‘The Fenian Record Player’.

Jim has a rich fund of stories, such as this: he had just moved into the Durham village of Hetton-le-Hole, and used to practice his melodeon in the open air. One morning, the door vibrated to a furious knocking; Jim, fearing the worst, was about to apologise for disturbing the neighbours and opened the door. A little old lady stood there and said: “Can you not finish your bloody tunes? I was just enjoying that!”

A Jim Bainbridge concert is like an invitation to sit in his kitchen, or the warm and friendly atmosphere that radiates from sessions in a relaxed West Cork pub. He has learned the art of playing in crowded bars, without amplification, and he made sure that everyone could hear – not by singing loudly or shouting, but subtly projecting his voice. He started off his final set with a few Irish reels and schottisches, followed with the popular north-eastern ditty ‘The Lambton Worm’, and the audience joined in with him by belting out the chorus: “Wisht, lads, hold yer gobs…” Jim is a fervent admirer of Bob Davenport, now 80 years old and going strong, and blessed with a massive and eclectic choice of musical tastes; Bob says that Jim “has listened and learned from the People rather than the Folk” – and Jim had a dedication to Bob’s long career with the song ‘Twelve Stone Two’, and followed with a Tommy Armstrong tongue-twisting favourite, ‘Wor Nanny’s A Maizor’ and the Elliot Family’s ‘Three Men Went A-Hunting’.

I always look forward to a Jim Bainbridge session; there are some who call it a concert, but that’s pretty much a highfalutin description of a man who just gets out his instrument and entertains everybody. Jim, may your lovely tradition live on.