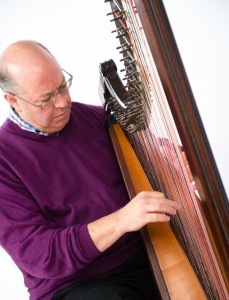 The good folk of Porthcawl didn’t know what had hit them; packed away in the Grand Pavilion, a flood of wonderful Celtic Magic bubbled, steamed and roared, and dancers and musicians from Wales, Cornwall, The Isle Of Man, Ireland and Scotland played, partied and delivered such jaw-dropping, exciting mastery that even the wizard Merlin could be forgiven for rising up from his grave and deliriously jigging with joy. It was that sort of a weekend.

Cwlwm Celtaidd is the Welsh translation for Celtic Knot; the festival officially starts on the Thursday, but it’s the Friday night, Saturday and Sunday when the action really kicks off. Ex-Mabon guitarist Derek Smith, who used to live in the town of Bridgend and who now organises Cwmafan Folk Club, started the whole thing off; he used to be a musician with South Wales team Dawnswyr Gwerin Pen-y-Fai, and it’s the Pen-y-Fai dancers who now form the basis of the Cwlwm Celtaidd committee.

FolkWales Online Magazine, who had been celebrating the Welsh win against Ireland and therefore missed the Jamie Smith’s Mabon Friday night concert, joined up with Cwlwm Celtaidd on the Saturday; and a whirlwind tour of the festival conveyed these impressions: the California & District Pipe Band, based in a former mining village near Falkirk, were impressively loud and proud; the lovely Limerick band Achrann come from the traditional Sliabh Luachra area and is made up of concertina player Greta Curtin, fiddler Jessie Healy, guitarist Darragh Horan and Eoin O’Sullivan on the banjo, and they joined forces with the young and exciting Kilcummin Set Dancers, whose saucy and delicate brush dance delighted the audience; outstanding fiddler Aneurin Jones and inspiring guitarist Dylan Cairns-Howarth raised the heat up several degrees with their full-on and flowing interpretation of a rich Welsh tune culture; the Cornish fiddle and guitar duo MacQuarrie and Toms joined in with the Cafe Bar session and played like a dream; the storming Calan were positively spitting fire with their new set, with Patrick Rimes stirring up fiddle and Welsh bagpipe frenzy, fiddler Angharad Jenkins sparkling and smiling, Sam Humphries‘ guitar the artful driving force, and accordionist and brilliant step dancer Bethan Rhiannon expertly controlling her fabulous, ringing voice as never before; and Clarsach player Elinor Evans, born in Scotland of Welsh parents, endured the bustle and distractions of the Grand’s foyer to serve up some amazing harp items.

Elinor is a hybrid of two Celtic cultures. She gained a doctorate in Scottish Music from the Royal Conservatoire of Scotland, and last year she completed a Post Graduate Diploma in Composition at the Royal Welsh College of Music. She joined master triple-harper Robin Huw Bowen‘s 16-instrument Harp Ensemble, nick-named Extrava-Cambria, which grabbed the audience’s fascinated attention for a whole hour; jazz harper Harriet Earis was a member of the ensemble, and she held the crowd’s attention with her lovely, grinning face and her nimble-fingered artistry. Extrava-Cambria presented a mighty sight as the musicians took the Stage Door stage; most imposing were no less than four triple-harps, all lined up four-square, like forbidding tanks. Robin chatted, joked and was so thoroughly entertaining while expertly lecturing; the audience lapped up the staggering wealth of information he was imparting, about the 19th-century romani gypsy Roberts family, all triple-harpers and led by John Roberts, following on the family line from his triple-harp playing great-grand-daughter Eldra Jarman, who lived in Cardiff and who taught Robin a wealth of gypsy tunes. The triple-harp represents the only unbroken harp tradition in the Celtic world; the knowledge was passed down by triple-harpers instructing their pupils, like Llio Rhydderch and Nansi Richards. Brothers Dafydd and Gwyndaf Roberts were Ar Log musicians and Nansi’s nephews, and she schooled them well.

Extrava-Cambria started off with the gypsy hornpipe from the super-rich Welsh tradition,  ‘Pibddawns Heol-y-Felin’, and the absolutely lovely ‘Walts Trefforest’. The 17th-century ‘Cynghansail Y Cymry’ (The Welsh Ground) was a entire textbook on descending ‘staircase’ notes, ‘Walts Yr Heulwen’ (The Sunshine Waltz) gaily tripped over the harp strings, and Edith Evans’ ‘Moel Yr Wyddfa’ (The treeless summit of Snowdon) was just beautiful in its splendour. Robin and the ensemble paid tribute with ‘Gwenynen Gwent’ (The Queen Bee Of Gwent), written in honour of Lady Llanofer, patron of the Gwent triple-harp ‘choir’ and wife of Sir Benjamin Hall of Llanover Hall, Member of Parliament for Monmouthshire who was later created a baronet; Gwenynen Gwent was her bardic name, and it was absolutely fantastic to hear those triple-harp double-note ‘echoes’ which have formed the basis of the Welsh harping sound.

Extrava-Cambria rang the changes once again with the dark, sombre ‘Ymadawiad y Brenin’ (The King’s Departure) and the concert was brought to an end with Robin announcing the last tune – “and no encores!” – a version of ‘Rîl Cymraeg Llanofer’ (The Llanover Welsh Reel), which finished on a storming, triumphant note.

There can be no doubt that Cwlwm Celtaidd is one of the major educational festivals in Wales, and they’re putting Porthcawl well and truly on the map – so why isn’t the festival receiving any Arts Council grants? Whoever’s fault this is, it’s a crying shame that the festival has to struggle for funds, which is indicative for the lack of Bretons, Galicians or any of the overseas Celtic teams and artists which were notably absent this year. Never mind the Brexit debacle; the Nation Of Wales surely needs a welcoming hand to our Breton, Galician and our Irish friends and neighbours – and Wales needs Cwlwm Celtaidd.

← Jim and his box squeeze out a canny proud tradition
Gigspanner: an amazing unique concert to relish and remember →