The Pitmen Poets tell a stunning story of triumph and tragedy 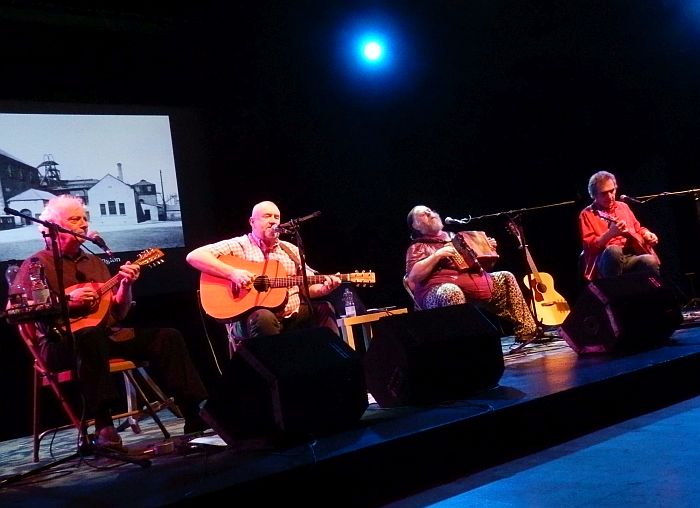 Last year, I reviewed The Pitmen Poets’ live CD, and I praised it to the skies. Now Billy Mitchell, Bob Fox, Benny Graham and Jez Lowe have launched the South Wales leg of their British tour in the former mining town of Blackwood, and the FolkWales Online Magazine verdict is: sheer, utter brilliance. The Miners’ Institute was crowded with ticket-holders, all looking forward to a good night out; the expectant sense of anticipation and friendly warmth it generated was just overwhelming.

Ex-Lindisfarne musician, front man and songwriter Billy Mitchell, War Horse Songman Bob Fox, much-travelled songwriter and singer Jez Lowe and leading exponent of Tyneside song Benny Graham have delivered an amazing cameo of North-Eastern mining life, which consisted of winning the coal in the dark, deep, dirty, deadly and dangerous pits, the workingmens’ pub culture, the cramped town rows and the many artful and clever music-hall songs of miner Tommy Armstrong, dubbed ‘The Pitman Poet’ – Billy, Bob, Jez and Benny named the show as an affectionate tribute to him.

However, a couple of hundred years of coal-mining and the pit-village society culture were torn apart with the Thatcher Government’s determination to smash the power of the NUM and close collieries piecemeal. The travesty and unfair injustice of the year-long 1984/5 Miners’ Strike was the result of that. Miners with many years’ work left in them were suddenly thrown on the scrapheap, and Arthur Scargill’s rhetoric was hopelessly loaded against the mighty power of the State, which instructed nationwide police forces to arrest and jail the strikers, no matter what. From the very start of the show, the chorus goes: “Howey, man, they’re liars and they’re cheats” to Jez’s song ‘The Coal Town Days’, highlighting the mining industry bought to a premature end.

The Pitmen Poets is a vivid, stunning, often hilarious story, punctuated by hundreds of images and films of a north-eastern miners’ way of life and a tribute to their hard, hot, precarious way of earning a living. The miners’ contempt and hatred for Thatcher in the year-long Strike was patently obvious; one photograph showed the slogan: “Support the miners’ strike: Keep crime off the streets” with an image of the Iron Lady rifling through the donations. The show, which taunted her as “The Medusa of Downing Street”, is an epic journey through the day-to-day working week of people who went down in the cages to the underground seams in the Northumberland and Durham coalfields. The audience, which came from Blackwood, from Pontypridd, from Caerphilly, from Llantrisant and all over the Welsh coalfield, was with the four musicians and the miners all the way, clapping and cheering delightedly at every coalpit song. However, the slag heaps, the winding wheels and the deep, dark shafts have disappeared now, and with it has gone the mining mentality and the unwritten rule about watching out for one another; attitudes have changed with the threat of global warming, and King Coal is regarded as just another dirty fossil fuel.

The Pitmen Poets kept the audience on the edge of their seats with a plethora of magnificent songs, including Billy’s ‘Shiftin’ To The Toon’, about the NCB management spin of ‘relocation’ following mine closures; the genius of Tommy Armstrong, writing Wor Nanny’s A Maizor’ and ‘The Row Between The Cages’, signalling the modern method of safer working and making the old, reliable way redundant; Jez’s affectionate, comical country song about the ex-pitmen’s potholing pub quiz team, and his heart-stopping epic ‘The Judas Bus’, tracing the hopelessness, the desperate, bitter anger and the futility when the mining community were faced with losing the 1984/5 Strike. The Northumberland and Durham coalfields were blessed with riches underground and an even richer working-class folk culture, which recorded the miner’s life in detail and in song.

The inevitable encore was ‘The Miner’s Lifeguard’, which many believe was a north-eastern rallying-cry but which evolved from the South Wales ‘Sliding Scale’ coal strike of 1898 and the song ‘The Miner’s Life’, sung by miners to the tune of the Welsh hymn ‘Calon Lân’; this momentous event forged The South Wales Miners Federation, the infant NUM. Despite a matter of 300 miles between the north-eastern and the South Wales coalfields, there were many links which made the same song; an article will follow in Folkwales Online Magazine very soon! Bob acknowledged the South Wales connection, but he emphasised: “It’s our song” – and the audience followed his lead and simply bellowed the chorus. It was a perfect way to end the show, and the crowd showed their appreciation in a standing ovation. It was a storming, brilliant night, and thanks be to the Miners’ Institute and The Pitmen Poets for their initiative in staging this wonderful, informative story-in-song.