Keith Hudson: Farewell to The Voice of Taplas

Iain Campbell wrote this obituary for The Living Tradition magazine; FolkWales Online Magazine is grateful to him for giving his permission to reproduce it. 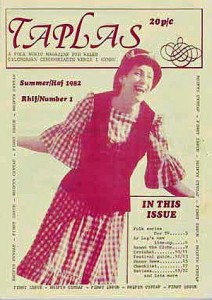 Keith was a familiar figure at folk venues throughout South Wales and sometimes beyond as he sought to sell copies of the magazine Taplas that he founded in 1982.

Keith was a private person and it has been difficult to piece together his pathway to the Welsh folk scene. We think he was born on September 7, 1940, in the London area. His father was an Army bandsman. As a youngster the fiddle was his first love, but his parents were unable to afford the tuition. He took up the melodeon in later life, but arthritis forced him to end his musical endeavours.

After school he attended Goldsmiths University and went on to qualify as a social worker. In the mid-1960s he married a Welsh woman and moved to Wales to work as a social worker in the Valleys. They had two sons, but the marriage did not last. His passion for Wales never left him though and, although English-born, he developed, nurtured and retained a strong Welsh identity. 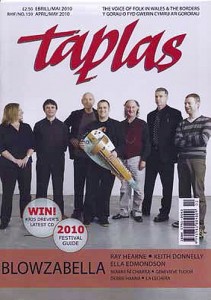 The interim period: Taplas 159, with Lucy Whitfield editing it and Keith taking a back seat

It is not clear how he came to folk music and dance, but he loved it with a passion. It may have been through his involvement with left-wing politics. He became involved with with SWAFF News, an early newssheet published by the short-lived South Wales Folk Federation. When that folded decided to start up a magazine himself, reasoning, as he once told me, “I could do it better myself”. The first issue came out during the summer of ’82 and was a monochrome, typewritten and letraset newsletter. It was an ambitious start, 22 pages of type and photos, and contained many of the features that sustained it through the years; news, a festival guide, reviews, listings and a dancing news (which was important as the name of the magazine means a ‘gambol, or a ‘dance’.)

Working with another stalwart of the South Wales music scene, Jed Williams (a founder of the Brecon Jazz Festival) as designer, later issues became more sophisticated. His mission was embodied in the strapline which was later added to the front page banner; ‘Y Gorau O Fyd Gwerin Cymru’, ‘The Voice of Folk in Wales’. This was later extended to ‘The Voice of Folk in Wales and the Borders’.

The magazine continued bi-monthly, with some redesign until 2003 when Jed died suddenly following a heart attack. Lucy Whitfield then took over the design duties. As the years rolled by, Keith became more troubled with ill health and publication was often delayed. In 2007 the Taplas board met and agreed that Lucy should take over as editor in order to get the magazine back on track. He was to take a more backseat role as reviews editor. Although he accepted the decision, it was felt that he resented it. 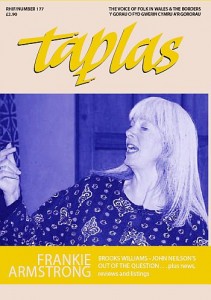 It became clear to the Taplas board that in an era of declining print media sales, the future of the magazine, in particular its financial security, needed to be examined. Various ideas including a link with The Living Tradition and whether the magazine should continue in a printed form were mooted and explored. Keith refused to accept the decision to re-think the future, and swore that he would produce the printed hard copy magazine anyway.  This effectively dissolved the board, and Lucy Whitfield resigned as editor.

Keith continued to produce a hard copy of the magazine until finances and his severely declining health intervened again. He bowed to the inevitable and circulated  the magazine to subscribers as an electronic pdf until its final issue, number 177, in January 2014.

He became well known in the folk world through his writing, photography and publishing. If he did not get to a South Wales gig, performers and audience members would enquire after him. He also arranged a series of gigs, under the Taplas banner, promoting his favourite performers from Wales, the rest of the British Isles and beyond. He was an accomplished photographer, teaching it at one point in his life. In addition to a bundle of magazines he would carry his camera and lenses to gigs recording the life of the folk scene. Many of the photos later appeared in the magazine. He developed all his own photos, often bringing them to the Royal Oak, a great pub we both frequented, to show around. He never really embraced colour photography and didn’t take to digital at all.

It could be said that he was a ‘black and white’ man in more than just his photographic preferences. He was a font of knowledge about folk music and dance and was never unafraid to speak his mind. I and other members of the editorial board had our disagreements, sometimes heated, but he always had the interests of the music and dance at heart. Promoters of festivals and gigs tell of how he did not always agree with their programming but always encouraged and supported their events.

Keith died in the University Hospital of Wales on June 27, 2015.

← Mari Lwyd: Make no bones about it, the tradition is just galloping away
The Pitmen Poets tell a stunning story of triumph and tragedy →