ANDY AND JILLIE TIE THE KNOT – CONGRATULATIONS FROM ALL OF US! 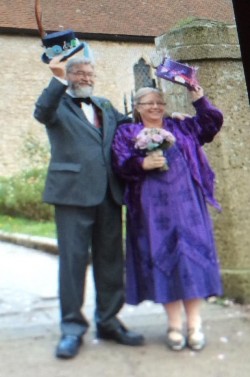 Llantrisant Folk Club  members Andy Jackson and Jillie Hambley celebrated their wedding in The Isle Of Wight on Friday, December 5, 2014. Andy was a retired sound engineer at BBC Wales in Llandaff, Cardiff, and he lived at Pontyclun; he was also acting secretary of the Club. They later moved to the beautiful tranquility of The Isle Of Wight, Jillie’s home base, where they planned a quiet wedding.   And even though the many miles meant that we couldn’t be there, the both of you will remain deep in our hearts. Llongyfarchiadau!