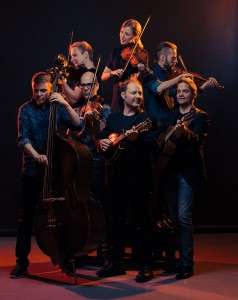 Two years ago, I drove to the Borough Theatre in Abergavenny to review a Finnish four-fiddle band who rejoice in the name of Frigg. The seven musicians trooped on stage, seriously stepped on the gas and totally blew me away with their fantastic, singing sound that only a quartet of violins can claw at the ears, their breathless, rip-roaring repertoire and their smiling, laughing energy. The audience roared for an encore and went home, exhausted, delighted and thoroughly happy.

Next week, Frigg are coming to the Roots Unearthed series at the L3 Lounge in Cardiff’s St David’s Hall on Tuesday, November 21. Not only are they performing a concert at 8pm, but they are teaching a one-hour workshop as a bonus at 5.30pm. The place will be really buzzing…

But why Frigg? Petri explained: “Frigg is the Nordic goddess of love and fertility, a kind of Mother Earth-type. Frigg is a good name for us – we want to share the message of love, understanding and goodwill among people during these troubled times.”

Furthermore, the Nordic goddess of love has reached out and embraced a thousand miles to us. Petri poses the question: “Did you know that the name for Friday comes from “Frigg day”?

The origins of the band go back to sister and brother Alina and Esko and their cousin Antti Järvelä, meeting up with Norwegian brothers Einar-Olav and Gjermund Larsen and jamming together when they were kids. Petri said: “However, the actual touring band was formed in 2000 when Antti asked me and Tuomas Logrén to join in the accompaniment section.

Musicians came and went, and the originally Finnish-Norwegian group has now become wholly Finnish – but Nordic influences remain strong. The band has been conquering the world – including seven North American tours – with a fusion of western folk music styles, leaning strongly towards Nordic folk music. In fact, the Music Media has lovingly coined the term Nordgrass, referring to Frigg’s bluegrass influences.

Most of the band live in the Baltic port and Finnish capital of Helsinki, and the rest live nearby. Petri said: “All of us have studied music there, and nowadays we all have different kinds of more-or-less regular working opportunities within the capital’s cultural life, besides Frigg – such as theatre music, teaching, orchestras and gigs. And the country’s main airport lies there…”

How does it feel, playing in a band with four fabulous fiddles? “Sometimes a bit tiring, with all the tuning going on. Sorry, just kidding – I’m a mandolin player! But everyone in Frigg is really professional, so the whole line-up works for us as an instrument that can be exploited in any way the music needs. The different instruments fulfil very well-organised fundamental roles, but all of us can switch roles when it serves the tune better.”

Frigg’s eighth and latest album, Frost On Fiddles, was released in different months in different countries; Finland in June, Germany in August and October in the UK. Everybody is looking forward to the Roots Unearthed concert, but Frigg’s Finnish Fiddle Tunes workshop for all string players – not just fiddlers – will be a course of opening the gateway on Scandinavia’s rich tradition. Band members will offer many Scandinavian tunes, such as jigs, reels, polkas, schottisches and waltzes – all of them taught by ear, but with the offer of scores for future reference. The band welcome classical, traditional, jazz and folk players; but will the quartet of fiddles feature in the workshop? Petri says it’s most likely, especially if there is quite a lot of interest.

This conversation with Petri and Frigg has certainly fired my curiosity and my imagination about Nordic music – for instance, I want to know about the Finnish kantele, the jouhikko and the säkkipilli, the Swedish nyckelharpa (which we saw loads of them at a Finnish dance festival) and the Norwegian hardanger fiddle…

Petri interrupts: “Wow, this is a huge topic! As a lecturer in folk music at the Sibelius Academy, I know better not to try to answer this shortly – and on behalf of our extraordinary neighbours! I suggest googling one of these at a time, and you’re bound to find good articles and pages about Nordic folk music eventually. Enjoy!”

← Emily and Lukas make it a perfect evening
Vrï: The jaw-dropping sound of Welsh chamber-folk thrills the eager crowd →