Emily and Lukas make it a perfect evening 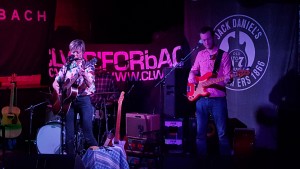 Memphis has Beale Street, New Orleans has Bourbon Street, thoroughfares known the world over for their vibrant music scene. If you’re in Cardiff and fancy sampling live music in the Welsh capital, then head to Womanby Street; it’s a medieval street lined with clubs and bars offering most genres of live music pretty much every night of the week. One of the largest clubs on the street is Clwb Ifor Bach, established in 1983 as a social centre for the Welsh-speaking population of the city. The venue is spread over three floors with bars and stages on each level; the smallest of these is on the ground floor, and it was this one that played host to Emily Barker and her band on the Cardiff leg of their current tour.

First to take the stage was Emily’s bass player, Lukas Drinkwater, stepping in at late notice to replace the indisposed Pete Roe, as the support act. I have seen Lukas perform on several occasions as part of a band, most recently with Ange Hardy on their Findings tour, but this was the first time I have seen him perform as a solo artist – something that Lukas himself admits doesn’t happen very often and, strangely enough, I was at his last solo performance at last year’s Dacorum Folk Festival in Hertfordshire.

Lukas’ set was perfectly suited to the relaxed and intimate atmosphere of the venue, and gave us an opportunity to see just how good a performer and songwriter he is in his own right. Having said that, the only cover of the evening coming when Emily joined him on stage for a rendition of ‘Chelsea Hotel’ to mark the anniversary of Leonard Cohen’s passing.

I have previously referred to Lukas as a Danny Thompson for the 21st Century but, based on this performance, he is so much more than that; he’s a talented singer songwriter in his own right. Perhaps it is time for Lukas to finish his solo album, step out from the shadows and enjoy the limelight himself – his is a talent that deserves to be exposed to a far wider audience.

But what of the evening’s main event? I hear you cry. Although I was already familiar with Emily’s music, this was the first time that I had seen her performing live; and as the evening progressed, I was not to be disappointed with the experience. The music on offer ranged from gospel through to jazz blues and country, with a strong emphasis on her latest release, Sweet Kind Of Blue, as well a selection of songs from her back catalogue.

The set opened appropriately enough with ‘Tomorrow Be Now’ before going into the first song to be taken from Emily’s latest release, ‘Sister Goodbye’ (Emily’s tribute to Sister Rosetta Tharpe and is sung from the point of view of her great friend Emily Knight at the time of Rosetta’s death.)

Other highlights for me included ‘Blood Moon’, a sultry jazz-tinged song inspired by a sleepless night in a cheap hotel under the Heathrow flightpath, ‘Nostalgia’, which is a song that should be familiar to fans of the BBC adaption of Henning Mankel’s Wallender novels; the title track from Emily’s current album was recorded at the legendary Sam Phillips studio in Memphis, and this song brought the evening’s proceedings to a suitably funky climax.

Owing to a club night in one of the upstairs bars at the venue, Emily’s gig was on a strict curfew for finishing – and with a bass thud coming through the ceiling, most performers would probably shy away from an a capella song for an encore. Emily, however, is not most performers – and it is testimony to the power of her voice that not only was her rendition of ‘Precious Memories’ able to overcome the vibrations from above, but she was also able to keep her audience entranced throughout.

During his set, Lukas described the audience and venue as having the ambience of a folk club or a house concert, and I have to say that I agree with him wholeheartedly. This was a relaxed and intimate performance that both the performers and the audience enjoyed in equal measure. Both the opening and the main acts were on top form; if you get the chance to see Emily and her band on the current tour, then do so. You won’t be disappointed, and hopefully it won’t be too long before we see them back in Wales.

Finally, if you do get to see Emily, check out the merchandise table; Emily’s Sweet Kind Of Brew coffee has got to be a contender for the most innovative tour memorabilia award for 2017.

← Dreaming The Night Field: how Brummie Stacey learned to love The Mabinogion and the Welsh language
Frigg’s Finnish four-fiddle freewheeling fantasia… and a bonus workshop! →