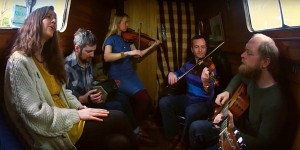 Tim leads The Dark Lanterns in a rehearsal on board The Mona Lisa: from left, Em Marshall, Ted Kemp, Karen Phillips, Robin Timmis and Tim with guitar

Tim Jones is totally over the moon at the critics praising his latest album, Blossom And Fruit. Even the ultra-hip major player in the folk-roots world, the mighty fRoots Magazine, awarded the traditional singer, guitarist and prolific songwriter and his band The Dark Lanterns a massive five stars and placed Blossom And Fruit in their Album Choice of the month, and proclaimed: “The second full-length album by this London group sees them taking a huge stride forward with an album full of consistently strong original songs with a leavening of English folk material”.

How does Tim feel about all the attention which the album has unleashed? “Dead chuffed! My friends were tagging me in it on Facebook before it even arrived, but it was much nicer to see in print.”

All the reviews are praising Tim and the band for promoting English folk; however, He was born in Sheffield but moved to Llandeilo at the age of six. His parents still live in Carmarthenshire; he spent his boyhood years in West Wales, but he left when he enrolled at university at 18: “Wales is great, but I think you should always leave where you grew up – even if you return, it gives you a bit of perspective on it and a sense of where you fit in the wider world. My Welsh used to be all right, but a few years away and you forget it quickly.“

Tim found work in London, where he lived on a canal barge called The Mona Lisa. It was there where he formed The Dark Lanterns; the current line-up is Ted Kemp (concertina), Karen Phillips (violin and piano), Robin Timmis (viola and violin) and Em Marshall (voice, guitar and cajon).

Tim said: “I have been playing with Ted for over ten years now, and he also plays in an amazing duo with his partner Laura Smyth. I then met Robin at a folk night that they were running in Kentish Town, and I met Karen at music workshops in Cecil Sharp House. Robin’s main thing is Klezmer and eastern folk music, so it’s been nice having a bit of a blend of those influences in what we do.

“Em is one of the best musicians and singers I’ve ever played with. Her solo album (which is coming next year) is unbelievable, like a real lost classic from the sixties folk revival – just a couple more tweaks and it will be ready. We were both on the same bill at a gig in London about 18 months ago – there was literally no audience, so we were basically playing to each other. One thing led to another, and I ended up following her down to Devon. We’re planning on getting married in a year or so – I’m very lucky!”

Tim and The Dark Lanterns used to be based in London, but not any more: Em and Tim live in Devon, Robin is in Leeds, Karen is in Camden and Ted lives on the boat which he inherited from Tim: “Yeah, she was mine and I lived on her in London – she’s a lovely boat and it was wonderful living on her, in a new place every couple of weeks. I moved down to the South West earlier this year, and they never got round to digging canals down to Dartmoor – pity, because it would have been a good way of getting the tin back to London. We meet up pretty regularly to work on new stuff and make sure we can still play live.”

Blossom And Fruit was recorded and mixed by Ian Carter of Stick In The Wheel, who is notching up a bunch of fine productions now. “Stick In The Wheel are one of our favourite bands,” said Tim. “We would run into them a lot in London and they were clearly the best around – the raw and authentic sound of what they do is also important to us, though we sound very different! Ian’s knack is very much that of choosing the right mic and putting it in the right place – which seems like it should be easy, but isn’t, and makes a difference that all the computer trickery in the world can’t replicate.”

The new album is peppered with traditional songs, such as ‘Polly On The Shore’ and ‘Sweet Lemeny’, mixed with Tim’s compositions, including ‘A Calling On Song’ (which he wrote with Em), ‘Alexandra Rose’, ‘Candles Out’ (about Londoners preparing for another wartime air raid), ‘The Gathering Storm’ and ‘The Lily And The Ivy’. In fact, Tim wrote the album’s title track, which is a hymn to Autumn. Master guitarist and great songmaker Martin Simpson tells audiences that he writes songs because there was no such song saying what he wanted to express; how does Tim feel as a songwriter?

“Yeah, a little bit – there is a lot of stuff in traditional music that is really powerful, and I’d like to take that and make it relevant to today – so in things like ‘A Calling On Song’, ‘Now you’ve called on me to sing’… that’s a great floating line, but actually if someone has called on you then you should sing something that matters, rather than having your pockets full of cheese or whatever (though that’s good, too). I like bringing voice to people who may not be particularly well represented in typical song-writing too – love-lorn twenty-somethings do okay, but potato pickers, blitz survivors, and old men struggling to make sense of a life not very well lived maybe not so much.”

Tim even forges the Welsh connection with Blossom And Fruit, which was mastered by Owain Fleetwood Jenkins, a Welshman living in Pembrokeshire: “He’s currently doing up an old chapel for his new studio, and I’m hoping to record the next album there. We also went down his place on a dairy farm to record Em’s solo album last summer.”

And while we’re on the subject of critics lauding Tim and The Dark Lanterns for raising the profile of English music, let’s not forget one track on the previous Oyster Girl EP, the tale of dastardly deeds committed in the South Wales Valleys in the name of ‘The Aberdare Drinking Song’: “This was a story recited to me while on a stag do in Edinburgh by a very, very drunk Welsh chef, who was brother of the stag. Obviously I was also a little worse for wear as well, but all the while he was talking, I told myself: ‘Don’t forget this! It’s going to be an amazing song!’

“The next morning I pieced together what I could, and I gave a bit of poetic license to the story. I was never sure how true some of it was – until last month when I played it and a guy from Aberdare confirmed a lot of the non-made-up details. It was pretty famous round there, apparently!”