Celtic magicians steal the show by fiddling up a storm 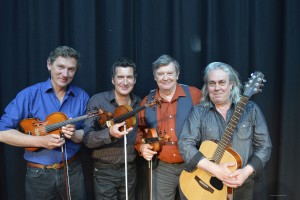 The Celtic Fiddle Festival were celebrating 25 years of performing together with a special tour, and the Lefel 3 Lounge was crowded out with eager punters all hoping to see and hear the latest fireworks – and they were not disappointed. The line-up is the amazing Kevin Burke, who played with Irish legends The Bothy Band; Christian Lemaître (of the famous Breton band Kornog) and stupendous guitarist Nicolas Quémener; and Charlie McKerron of the wonderful West Highland-based band Capercaillie. They absolutely stole the show with their jaw-dropping arrangements, and the audience roared for more of that stunning stuff. It was a night to end all nights, and the fans poured out of the St David’s Hall exit completely elated.

The origins of The Celtic Fiddle Festival go back to 1993, where Kevin and ex-Silly Wizard fiddler Johnny Cunningham decided to form a duo for a one-off gig in New York City. Kevin and Johnny were always friends, their relationship built on respect for the fiddle; one would often gate-crash the other’s concerts, entertaining the audiences and each other with their music and their often irreverent banter. Up stepped Robert Browning of the World Music Institute, who affirmed that a concert featuring Kevin and Johnny was exactly what he wanted to promote. The event was a resounding success, and strengthened their resolve to tour together.

They approached the Herschel Freeman Agency about arranging a tour. Herschel readily agreed, but he felt the tour would be even more successful if another fiddler could be on the bill – so the great Breton fiddler Christian was roped in. Herschel nick-named the trio The Celtic Fiddle Festival, and the name stuck. European and US tours followed, with the late John McGann and other musicians accompanying; a second CD was recorded, but tragedy struck when Johnny died of a heart attack in 2003, while he was in New York planning a tour. After much soul-searching and encouragement from Johnny’s friends, Kevin and Christian decided that The Celtic Fiddle Festival would carry on touring and recording albums, which was what Johnny would have wanted. With the present line-up, they released their latest album, Storm In A Teapot – and what an audaciously excellent collection it is.

Kevin, Charlie, Christian and Nicolas always start the show with a solo fiddler demonstrating different styles from Ireland, Scotland and Brittany; then the whole quartet come together to prove that the Celtic family is one and the same culture. Christian and Nicolas kicked off with a Kas Ha Barh, a beautiful an dro-type dance from Southern Brittany, and a Gavotte from Pontivy, in the centre of the Breton mainland; Charlie was next with the air ‘Cluny Castle, Inverness-shire’, William Rose’s ‘Atholl Highlanders’ March To Loch Katrine’ and the Newcastle composer James Hill’s strathspey-style ‘Earl Grey’. Nicolas astounded the audience with his three traditional tunes which go to make up a Dans Fisel, plus one composed by bombarde player Christian Faucheur; and Kevin was the last, his dancing fiddle clearing the way for ‘Lucy’s Fling’ and ‘Some Say The Devil Is Dead’ – “Not if you read the newspapers”, he quipped.

All four roared back after the interval with ‘Ricardo Portela’, composed by the great Breton musician Patrick Molard on the bagpipes in Galician style, followed by a traditional Muniera, a Galician jig. The great tunes just kept on flowing; ‘Lochleven Castle’ and ‘The Goat Island Reel’, the wonderful ‘Mason’s Apron’ and a memorable melody composed by the Irish band Beoga’s Seán Óg Graham. The developing, swelling sound of the three fiddles was intoxicatingly breathtaking, and Nicolas anchored the music with his mesmerising and inspiring guitar arrangements. They paid tribute to Johnny with two Cunningham compositions called ‘Leaving Brittany’ and ‘Pernod Waltz’, dedicated to anyone who has drunk too much of the aniseed nectar.

All three fiddlers and Nicolas elicited delighted whoops from the audience with their cheeky arrangement of ‘Music For a Found Harmonium’ by the late lamented Simon Jeffes, composer of the Penguin Café Orchestra, where everyone did his party piece; Charlie started with a mind-boggling Eastern European dance, followed by Christian’s ‘Humoresque’, an uplifting and complicated variation which had Dvorak spinning in his grave, and Kevin rounded off with a romantic, sultry musette. They played a fiery jig and a rip-roaring reel to end a marvellous performance – and hundreds of Cardiffians, their ears still ringing from that exciting fiddle sound, went home completely entranced. It was that sort of a magical night…