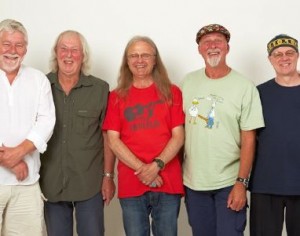 FAIRPORT CONVENTION takes the stage at St David’s Hall in Cardiff city centre for their self-styled “Wintour” this Sunday, January 31 at 7.30pm. Hailed as the originators of British folk-rock music, the five musicians have been one of Britain’s best-loved bands for nearly 50 years. The five musicians have been described by The Guardian as “impressive musicians with a great back catalogue,” Fairport were launched in 1967’s ‘Summer of Love’ and clearly got noticed and acclaimed with their eclectic folk-influenced material. Former members include master guitarist and celebrated songwriter Richard Thompson, the incredible fiddler Dave Swarbrick and the late lamented folk singer Sandy Denny; now guitarist and lead vocalist Simon Nicol (left in the picture) is the only founder member. However, today’s band members (drummer Gerry Conway, fiddler Ric Sanders, bassist Dave Pegg and multi-instrumentalist Chris Leslie) retain a passion for live performance making Fairport one of the most entertaining bands on the concert circuit. Concert tickets cost £21, plus a fee of £2.95.

BOB FOX, the War Horse Song Man,is on a rare tour in Wales in February, playing at Newport Folk Club in Rogerstone, Gwent (February 4), Rhyl Folk Club (5) and Fairbourne Village Hall, on the Gwynedd coast (6). Tickets for the Fairbourne concert, which starts at 7.30pm, cost £10 from Fairbourne Post Office, or a phone call on 07595 156202. Organiser Bob Turnpenny said: “This concert represents a very rare chance to see Bob performing live in our part of the world.”

SILLE ILVES, the wonderful Estonian singer and musician, has taken a prestigious folk culture post in her own country. Sille came to the Swansea Valley to be with her husband, ex-Boys Of The Hill member Martin Leamon, and she played hurdy-gurdy, fiddle and Estonian kannel with Martin in the Wales-Estonia duo Sild, the Gerard Kilbride project Taran and the twmpath trio Gower All Stars, where Martin and Sille teamed up with legendary Fernhill musician Ceri Rhys Matthews and and, on  occasion, Fernhill singer Julie Murphy. Martin is staying in Wales to sell their house, and he will be joining Sille in Estonia very soon. Meanwhile, her place in the Gower All Stars has been taken by West Wales fiddler Elsa Davies.

THE VALLEY FOLK CLUB sessions are hanging in the balance after the news that their pub base, The Ivy Bush, has been put up for sale. The club, which meets fortnightly on Fridays, is pressing ahead with Greg Rowlands plus The Rumblestrutters, (double bill, February 19) vintage blues from Latemouth Blake (March 18), Ffynnon (April 15). Squirrel Hillbillies from the USA (May 20) and Hungrytown (October 21).

RHYL FOLK CLUB meets at Tynewydd Community Centre, Coast Road, and Bob Fox is the guest on February 5. Greg Russell and Ciaran Algar appear on March 11. Jaywalkers are on April 15, while Jeff Warner (son of American folk collectors Frank and Anne Warner) is on June 3.

← Brilliant originality – that’s Huw!
What a party! Jamie’s band launch The Space Between →